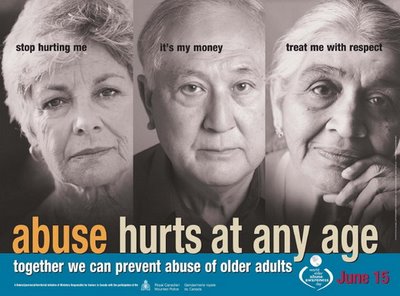 She’d grown up being bullied, threatened and called names by this man. He treated her mother the same way, and eventually her parents divorced. After decades of little or no contact, Mom died. Dad reappeared, promptly moved into Mom’s vacant house, and proceeded to trash it, after selling everything he could find.

Now my friend’s father could no longer care for himself. She made plans for him at the local assisted living home, but he kicked up such a ruckus there that the authorities were asking her to intervene.

Dealing with abuse as an adult

Although most media stories seem to focus more on adult children abusing their helpless parents, there’s a substantial population out there who are dealing with the opposite — having to care for parents who rarely treated them well as kids. Sometimes it’s due to drugs and/or alcohol — sometimes because Mom or Dad were abused themselves, and don’t know any other way of parenting. Physical abuse may be part of it. More often, children have grown up being called names, told that they’re worthless, seen themselves shunted off in favor or another sibling, or ridiculed. Sometimes they’re used as income-generating machines or unpaid housekeepers until age 18 — then told to get out.

Now that those children are adults, the parent may well appear on their doorstep, asking for financial help — a reconnection — or both.

What can you do?

You could sue your parent for mismanagement. (Some celebrities have tried it. One mom counter-sued, even though she’d been receiving $7500 monthly, saying she’d “sacrificed her happiness” for her daughter, and really deserved $30,000 a month, instead.) But thanks to foolish spending, they have no money, anyways. In fact, that’s why they’re parked on your doorstep.

You could give them free rein. Take the money meant for your family. Say anything to you that they feel like spouting off about. Treat your friends and family with contempt, or telling them vicious lies. Letting them do what they want…that’s “honoring your father and mother,” right?

You could slam the door in their face. In fact, you may have cut off or minimized contact already, just to be able to heal and get on with your own life. You’ve worked hard to learn to value yourself and your contributions. Why let them anywhere near your life, now that you’ve worked so hard to have one? (And how will you feel, if you do this? What will they say to you?)

Guilt…anger…a reluctance to talk or act back because, after all, that’s not what a Good Girl or Boy would do. Truth is:

You are no longer that child.

You haven’t been, for a long time. This raging, manipulative person may be your parent, but they are no longer the only adult in the equation. It’s time for you to act.

Decide how much contact you can handle, and stick to it. If Mom screams at you during your daily visit to her room at the assisted living center, do what one staff member advised: don’t come for a few days. (“She was as sweet as pie on the next visit,” the daughter remembered.) Perhaps your relationship can only handle a call or two a month, and presents on holidays. Perhaps you can take a little more. You decide.

Don’t cave because of guilt. Your parent decided what they wanted to be long ago, by their words and actions. It’s not your responsibility, as their child, to “fix” things now.

Be independent on your own terms. If Mom’s slipping you money, she may feel she has the right to dictate what you do with it — and the rest of your life. Solve the problem by letting her keep the cash: your self-respect is priceless.

If possible, get your siblings’ help. A united approach works wonders. It also lets you double-check the reality of the situation: Dad may be telling your little brother a totally different story than he’s saying to you. (I’ve learned this from experience.) Take turns: knowing you must deal with someone once a month, versus every week, can make a big difference.

Offer solutions…but don’t get upset if they’re rejected or belittled. Being a responsible kid means you’re free to research possible housing situations, meal options and medical care. But it doesn’t mean forcing them to do anything.They have to decide.

You are not required to care for them in your own home. Nor are you required to pay their expenses. Only their estate is responsible for medical bills and credit card debt. (Note: Do not take out a credit card with them as a co-owner — or you will be responsible for paying back that money. Don’t co-sign a loan, for the same reason.) If you want to help, and have the funds — fine. But even one payment doesn’t mean that you must do it every month.  Being an adult means you take care of yourself. (Repeat that as a mantra, if you need to.)

Forgiveness is not a sign of weakness — but strength. In a 2008 essay, history professor Wilfred McClay writes, “[F]orgiveness is in danger of being debased into a kind of cheap grace, a waiving of standards of justice without which such transactions have no meaning.”

Forgiving, in this case, means acknowledging the situation. It means understanding what may have caused your parent to act the way they did. (And, in turn, how it affected you.) It does not mean ignoring the pain, or pretending it’s not there. It certainly does not mean that you deserve, or should allow, further abuse, either for yourself or your family.

Finally, be the best parent/friend/person you can be. It’s fashionable to blame your own bad decisions on your childhood parents or poverty. It’s the old “nature vs. nurture” argument. But there are plenty of individuals who have overcome much worse situations than your own. Start acting like the kind, responsible adult you wish your parents would have been, and you’ve literally stopped the pattern in its tracks for the next generation to come.

You’re not the only one going through this. It’s also helpful to remember that Mom or Dad may be acting this way now, even though they were great parents when you were young, out of dementia, sickness — or just plain frustration at the encumberments of approaching age. They can attack you because you’re ‘safe:’ they know you won’t attack them back.

Do the best you can, and forgive yourself for not being the Perfect Child…whatever that is. Only then can you get on with your own life.