It’s easy to find out what  Bill Gates thinks…sort of.

The founder of Microsoft and the Gates Foundation keeps a blog, Gates Notes, that chronicles his notes and thoughts on a wide variety of subjects. He’s written (or at least had ghosted) several books. (See below.) And though he’s not full-time with Microsoft anymore (he stopped actively working, he says, in 2008), he still gives interviews now and then. Add those all together, and you start to get a better picture of what’s important in Bill Gates’ life…now, as well as back then.

When you’re starting out, get what you can either free or cheap–or swap your work for it. As a high school student at Lakeside School in the 1960s, Gates’ initial exposure to computers came via the ASR-33, a rudimentary machine students could type commands to, with the answers sent back via a roll of teletype paper. Through it, Gates learned BASIC, and along with other self-taught hacks (including his Microsoft cofounder, Paul Allen), began playing games, writing code and generally learning the skills that became the foundation of his business.

This happened, though, because a Seattle-based company, Information Services, needed a new payroll program. In return for their work on that project, Gates and his buddies received free computer access –– all the time they wanted. (Those who were first exposed to computers in the Sixties and Seventies can remember just how precious that reserved time was.)

That in turn got them noticed by TRW, who hired them to work on a computerized monitoring system for a power plant in Oregon — while Gates was still in high school.

Pay attention to what’s important — to you, at least. Put aside what isn’t. That attitude meant Gates continued to concentrate on writing computer code during his years at Harvard, as well as playing a lot of poker. He eventually dropped out, something he regrets today. (See the next lesson on this.) But that refusal to stick with just the basics also meant he was free to explore whatever area he interesting. That attitude continues today, including taking online classes and lectures in a variety of subjects. “Even though I only have a high-school degree, I’m a professional student,”Gates says.

Innovate before others can get to it. “Up to 1974, all computer languages in existence were written for mainframes,” Daniel Gross points out. “Microcomputers, the forerunners of personal computers, were ‘born’ without a computer language.” Gates and Allen persuaded Ed Roberts, the inventor of the Altair 8800, an early computer, that they had written a BASIC code for the machine.

They hadn’t. In fact, they had never worked with an Altair — only another machine that mimicked it. But somehow, in eight weeks and very little sleep, they managed to come up with a version of BASIC. Gross documents: “Allen nervously entered the language program onto the machine as Roberts watched; most of it was on a paper tape, and some crucial last-minute commands were entered by hand. After absorbing the new instructions, the Altair responded…he [Allen] answered, and then it typed, ‘Ready.’ With that word, a new software industry was launched.”

With the funds from their stunning success, Gates and Allen founded ‘Micro-Soft’ the next year, in 1975.

Make your enemy (or your competition) your friend.

In the 1990s, Microsoft’s fiercest rival, Apple, was in serious financial trouble. Gates realized that it was important for Microsoft to continue to remain compatible with it, nonetheless: “In the Apple II era, we were kind of friendly competitors,” he said. “We actually put more people on the Mac than Apple had.”

After Steve Jobs returned to Apple in 1996, he worked out an agreement with Gates (“We did the deal in three days”) that included buying a 6% share of Apple…which lawyers convinced Gates that Microsoft shouldn’t keep for antitrust reasons. (“It would have been nice if we had,” he said.)

You will have regrets. It’s what you do with them that counts.

To this day, Gates regrets that he didn’t finish his college degree. (An honorary 2007 doctorate from Tsinghua University in China may have helped salve the wound, but the scar is still there.) He also regrets some of the design decisions, especially to release early, that he made about Microsoft products, including implementing one of computing’s most awkward commands, the “three-fingered salute” control-alt-delete. (And if you’ve forgotten some of your mistakes, become famous. Other people will catalog them for you.)

The Microsoft founder doesn’t claim to have all the answers. In fact, he describes his foundation’s process as one of continual refinement: “to learn, make mistakes, try new things out, find new partners to do things.”

Listen to a friend.  In this case, it happens to be Warren Buffett, the great financial guru, who’s whispered in Bill’s ear. First and foremost, Warren urged him to keep things simple, Gates said. Time is limited — so use your ‘platform’ of influence for the issues you believe are particularly important.

“The first thing people learn from Warren, of course, is how to think about investing,” Gates said. “…Unfortunately, that’s where a lot of people stop, and they miss out on the fact that he has a whole framework for business thinking that is very powerful. For example, he talks about looking for a company’s moat—its competitive advantage—and whether the moat is shrinking or growing. He says a shareholder has to act as if he owns the entire business, looking at the future profit stream and deciding what it’s worth.” (Gates’ column on Buffett’s influence is here. Did Warren persuade him to eat more cheeseburgers and cherry Cokes, too?)

Money isn’t everything…though it helps.  Bill and wife Melinda are not shy about listing those issues that their foundation intends to help address, including vaccinations, polio, malaria and agricultural development. Some of their conclusions, however, have been controversial — for example, arguing that vaccinations should be used as a method to control world overpopulation. And some of their experiments in funding education, including tablets in classrooms (“Just giving people devices… has a horrible track record,” Gates admits) and subsidizing several private schools in the inner city, have spent a lot for little, if any, results. Obviously, throwing money at these struggles hasn’t made them all go away.

When asked if he still wrote code, Gates replied, “Not as much as I would like to. I write some C, C# and some Basic. I am surprised new languages have not made more progress in simplifying programming. It would be great if most high school kids were exposed to programming.” He has more time to work with the Gates Foundation. (His three children will get ‘only’ $10 million each — the rest goes to the foundation.) Has he learned other lessons besides these mentioned? Sure.  (In fact, this writer came up with  25 more lessons Gates learned over the decades.)

What is clear, though, is that’s just what he expects. After all, that’s how you learn. 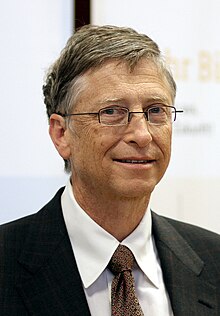 Not only are there excellent online references about Bill Gates, including several interviews (links are throughout this post), but you can also find a number of books about (and by) him. One of the best ways to find out what Gates is thinking and planning, though, is to read his own words.  Business @The Speed of Thought is thought to be one of his most revealing books…

His visionary book, The Road Ahead, will also give you an idea of where he (and Microsoft, by default) are heading. Also helpful, for this post, especially: the chapter on Gates in Forbes’ Greatest Business Stories of All Time by Daniel Gross.