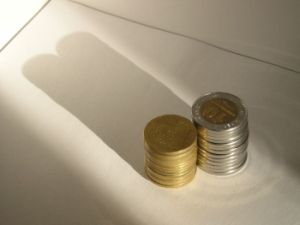 I know what you’re thinking. In this site, we’re always talking about ways to economize. Saving on insurance, getting a job, using the right credit cards, even hedging your bets…all these are meant to help your money grow.

So why would we now warn you against getting rich?

Because having more money brings its own set of challenges, according to Robert Frank, author of Richistan: A Journey Through the American Wealth Boom and the Lives of the New Rich. (Long title, more meat?) Frank has studied the rich for a long time, and profiled them in the Wall Street Journal. When he began studying the habits of the rich back in 2003, he discovered that millionaire households in the U.S. had literally doubled since 1995. More than eight million households were worth at least a million dollars or more, including possessions, investments and real estate.

But that was back in 2003, before the stock market tanked and real estate crashed. And American millionaires must be worth much less today, right? Actually, just the opposite.  A quarterly report prepared by the Economist Intelligence Unit on behalf of Barclays Wealth in 2007 estimated nearly 17 million millionaires in the U.S. alone. All moaning about losses aside, there are still a lot of very well-off people in America – as well as other countries.

(Note: The spotlight here is on America, primarily because it is also that of Frank’s. He is clear, however, that the process covers not only the U.S. but many other countries, especially China, which he says is the second-fastest-growing home of millionaires. Your particular place origin, if you’re not red, white and blue, may be next.) 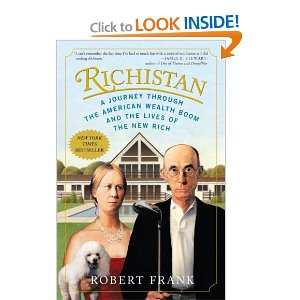 Frank’s country of “Richistan” actually has three different areas. The first is Lower Richistan, for people worth $1-10 million. This “sprawling suburbia” of 7.5 million households lives in McMansions, according to Frank, prefer SUVs and “relax in lawn furniture purchased from the Frontgate catalogue.” Less than 10% inherited their wealth, and only a few percent are celebrities. They earned their money through working a high-level occupation, or even more popular, by starting a company, then selling it.

These people not only tend to be much younger than what Frank calls Old Money — they are also far more diverse. Race, gender, geographical origins vary widely, but  political beliefs, surprisingly, do not. Many of the younger millionaires are much more liberal than their “older-line Republican counterparts” in higher income levels.

Middle Richistan ($10-100 million) and Upper Richistan ($100 million – $1 billion) inhabitants are not as important to this argument, Frank would argue, because they have enough money cushion to ride out any uncertainties. Lower Richistanis, on the other hand, can end up merely “affluent” (an insult, by the way) with only a few financial setbacks.

Here There Be Dragons

Here’s where the dangers lie:

You may forget where you’ve been. Your zeal to move where the Beautiful People are (Los Angeles, for example, where the highest percentage of millionaires live per capita) may distance you in more ways than one from the family and settings that made you who you are today.

That includes wives and children, as well. Many of these Richistanis have gone through multiple marriages, in part because their work demanded so much time and effort.

You’re unaware (or uncaring) that time changes all. After all, you’re young. (Or willing to spend for the latest age-defying treatment.) You’ll live forever, right? Even Donald Trump’s comb-over is starting to look a tad thin on top, in spite of his best efforts.

You may be buying a larger, more lavish house and furnishing it with a smaller, but more specialized staff. No wonder “household managers” are paid comfortable salaries by these nouveau millionaires: they’ll keep track of everything from budgets to lawncare, to booking their employer’s working trips to Europe and making sure the custom hottub is properly sanitized. (The richer you are, the more paranoid you are of germs, according to Frank.) This all costs money.

In order to keep up, you may be spending money you shouldn’t.  According to Frank, at least 20% of all U.S. millionaires spend all of their income — or more. Every single year.

But why are you spending that money? All too often, it may be to impress and compete with those who have more income than you do — people who have enough extra to make costly purchases (and mistakes) without having it seriously impact their lifestyle.

What about the future…or downturns? Millionaire households took on billions of dollars of debt in the early 2000s, money that should have protected them in times of uncertainty. (Not to mention the lack of saving for future retirement.)

Your investments aren’t diverse enough to handle that kind of stress. A surprising amount of millionaires keep their funds in just a few stocks — often connected with the company they founded, or worked for decades at. If their stock tanks, they go with it. (Witness Martha Stewart Omnimedia, which was selling for more than $20 years ago. As of this writing, one share is $2.37, making Stewart a mere $970 millionaire. Poor girl.)

It’s not just stock, either. An increasing number of celebrities have been forced to sell mansions for much less than they paid; some have let the properties go into foreclosure or auction, instead. In many cases, more than one house or properties are lost — when just one purchase, instead of several, could have preserved. (Ask Allen Iverson. He knows.)

The strongest lessons in this intriguing book are the simple ones:

The increase in millionaires has had mixed results.

“On one hand, Richistanis represent all that’s great about the American economy and the ability of just about anyone anywhere to get wealthy,” Frank says. “Yet Richistan also symbolizes the huge gap that’s grown up between the rich and everyone else. Even as the rich have grown more numerous, they have also become more financially and culturally removed from the rest of America.”

Let’s hope the trend reverses itself; America certainly needs all the help it can get. At the very least, refining your own goals – whether you’re a millionaire or not — lets you measure up to what’s really important in life.

5 Responses to The Peril of Getting Rich